As we move closer to the finish line, let’s not let our corn stress. Keep in mind physiological maturity usually occurs about 20 days after dent stage or 60 days after silking. Irrigation should be continued long enough to supply plant moisture needs until physiological maturity or "black layer" is reached. This is signified by the formation of a dark abscission layer at the base of kernels and forms when hard starch accumulation completes its progression from the top to bottom of a kernel. Seed weight accumulation is complete at this time. 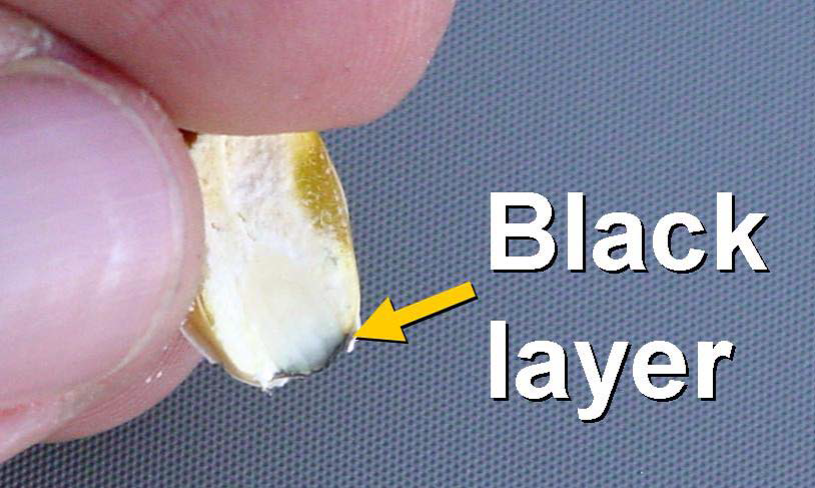 A common problem is early termination of irrigation. When normal July weather persists and rainfall fails to meet crop demand, water deficit or premature irrigation termination will accelerate maturity, prohibiting kernels from reaching their full potential size and weight. Although kernels appear somewhat mature and corn water use begins declining at the dent stage, this is too early to terminate irrigation. Potential kernel weight is only about 75 percent complete at the dent stage. Thus, termination of irrigation at the dent stage can reduce grain yields as much as 15-20 percent especially when hot, dry conditions persist. Early irrigation termination will also likely reduce stalk strength and promote lodging, because plants will cannibalize energy from vegetative organs to fill kernels when they are stressed.

"Milk-Line" Development
Corn kernels mature from the outside in when hard starch forms—beginning at the top of the kernel at dent and steadily progressing toward the base of the kernel (where it attaches to the cob.) This final stage of grain development normally takes about 20 days to complete. The most reliable method for you to monitor kernel maturity for irrigation scheduling purposes is to observe the progression of the milk-line (or hard starch layer) between dent stage and black-layer or physiological maturity. The milk-line is more relevant than the black layer, because it indicates maturation progress, before the black layer is evident. The milk-line is the borderline between the bright, clear yellow color of the hard seed coat outside the hard starch, compared to the milky, dull yellow color of the soft seed coat adjacent the dough layer. To observe the milk line, break a corn ear in half and observe the cross-section of the top half of the ear (the side of kernels opposite the embryo). If you have difficulty seeing this color disparity between layers, you can find it by pressing your fingernail into the soft, doughy seed, starting at the kernel base and repeating this procedure progressively toward the tip, until you feel the hard starch. 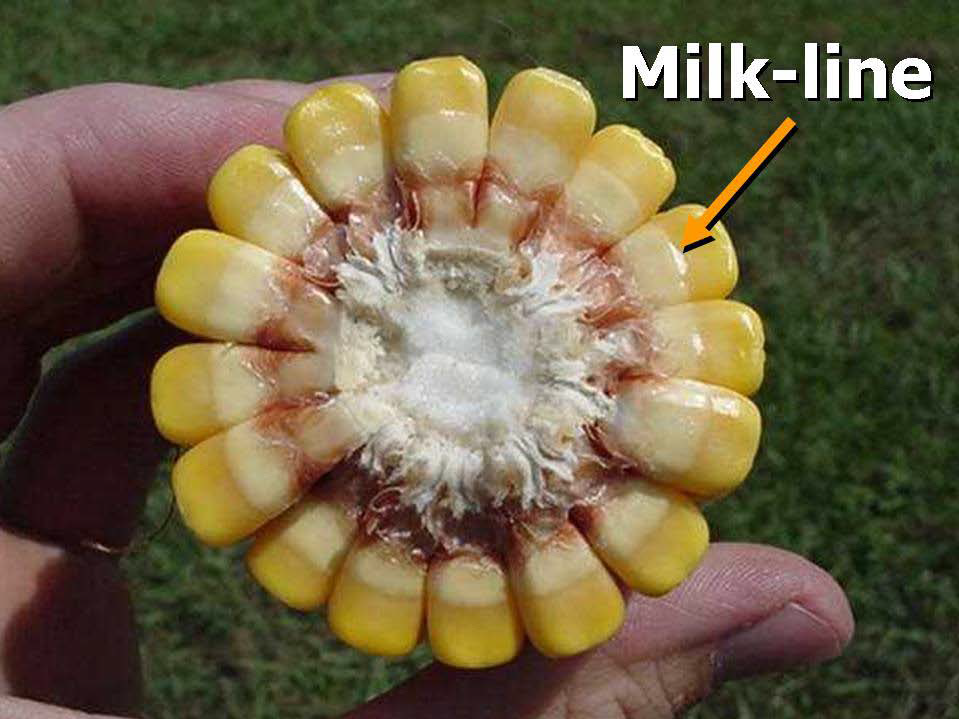 This is a cross-section of an ear of corn with the milk-line advanced half-way down the kernels. Since this process takes about 20 total days to complete, this corn is about 10 days from physiological maturity and needs sufficient moisture to fill seed weight during this period.

Don’t think anyone would argue at this point that we need all the yield we can get. Make sure you’re following all the way through with irrigation to maximize those yields!

Curtis Fox // This email address is being protected from spambots. You need JavaScript enabled to view it.