All futures and equities data is a 60 second snapshot of the below exchange delayed rules.

In the Corn Field: Water and Nitrogen Loss

With prolonged persistent rains and saturated soil in many areas, there may be concern that some fields may have experienced nitrogen (N) loss. Nitrogen loss depends on many factors. Considerations include: soil type, amount of rainfall, rainfall intensity, when nitrogen was applied, nitrification inhibitors used, organic matter levels and many more. Here are a few things to think about if you’re concerned about your corn.

Saturation for long periods usually occurs in the lower areas of the landscape, not the entire field. In some fields these areas will be larger than in others, but still typically not the entire field. Significant denitrification in these areas is not the only problem. Limited oxygen to plant roots—up to seven to 10 days or more—can kill the plant or cause root changes that will severely limit yield potential. If these areas dry out, and the plants are living, it is probably not profitable to apply more nitrogen to these areas. Denitrification is usually only a problem with surface soils because that is where most of the bacteria that break down organic matter are located. These are the same bacteria that use nitrate under low oxygen conditions; in low organic matter soils, or subsoils, there are fewer of these microbes.

Avoid applying nitrogen after heavy rains based on plant color. Plant roots growing in a saturated soil under low oxygen conditions cannot effectively take up nutrients. Therefore, a plant can exhibit nitrogen deficiency symptoms, even though the soil can have adequate nitrate-N. Once root zone aeration is established, these plants will often green up (although yield potential may have been reduced.)

Many growers ask if applying foliar N will help green up the plants. If leaching is the problem, and soils are not saturated, a foliar application will not help. In most cases it's too small an amount to meet the plant's needs—even assuming that the plant takes up this N foliarly. In these cases, we would probably be better advised to apply more N as a broadcast or injected application. If the plant is a yellow color, and it is due to possible denitrification losses, we would need to wait until the soil is firm enough to hold a sprayer or tractor. By that time, the plant will probably green up on its own, or roots will be so damaged that the N will make little difference in yield potential.

Late Planting and Its Impact on Yield


Planting date is a critical component in maximizing corn yield and profitability. For example, in Louisiana, we start to get concerned about losing yield potential if corn is not planted by April 10 in the southern half of the state and by April 20 in the northern half of the state. However, corn productivity or yield does not abruptly fall off a cliff when we reach or go past those two dates. Corn planting date field studies have been conducted in Mississippi using furrow irrigation. Results from the study found that yields were reduced about 0.8 percent for each day past the optimum time to plant corn.

Based on these numbers, corn planted on May 1—10 days later than the last optimum planting date of April 20 for the northern portion of the state—would suffer an 8 percent (0.8 percent x 10 days) yield reduction. The results in Mississippi are very similar to, or not substantially different from, studies conducted in the Corn Belt. Two Corn Belt studies found that yield losses are about 0.5 percent, 0.7 percent, and 0.9 percent per day of delay for the first, second, and third 10-day periods past the end of the optimum planting window. Therefore, regardless of your location, there is very little justification to abandon corn if planting is slightly delayed past the optimum dates. 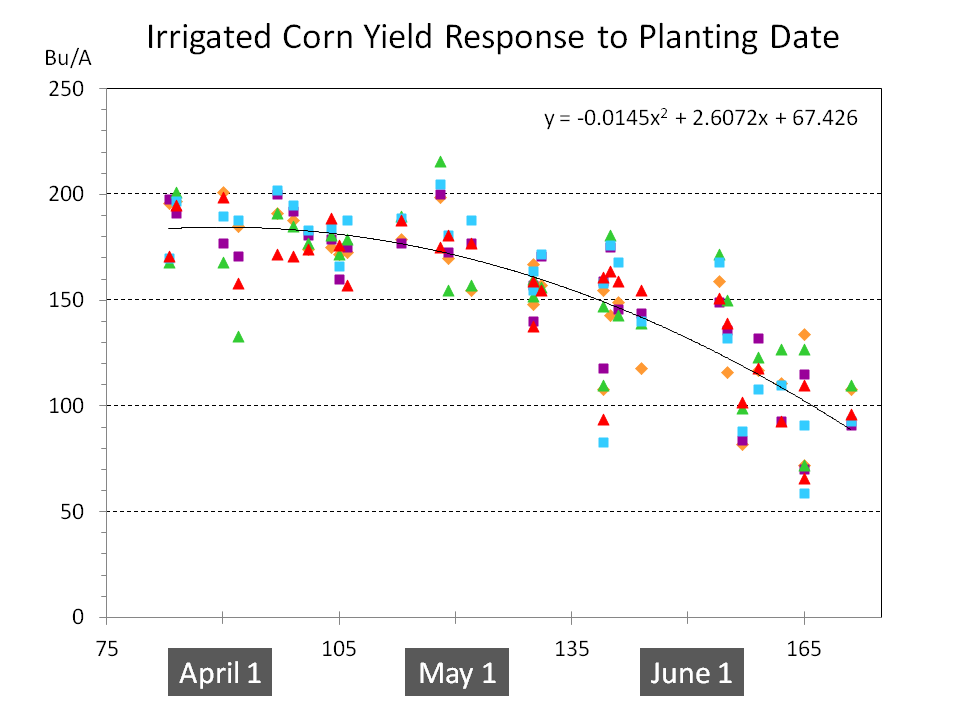 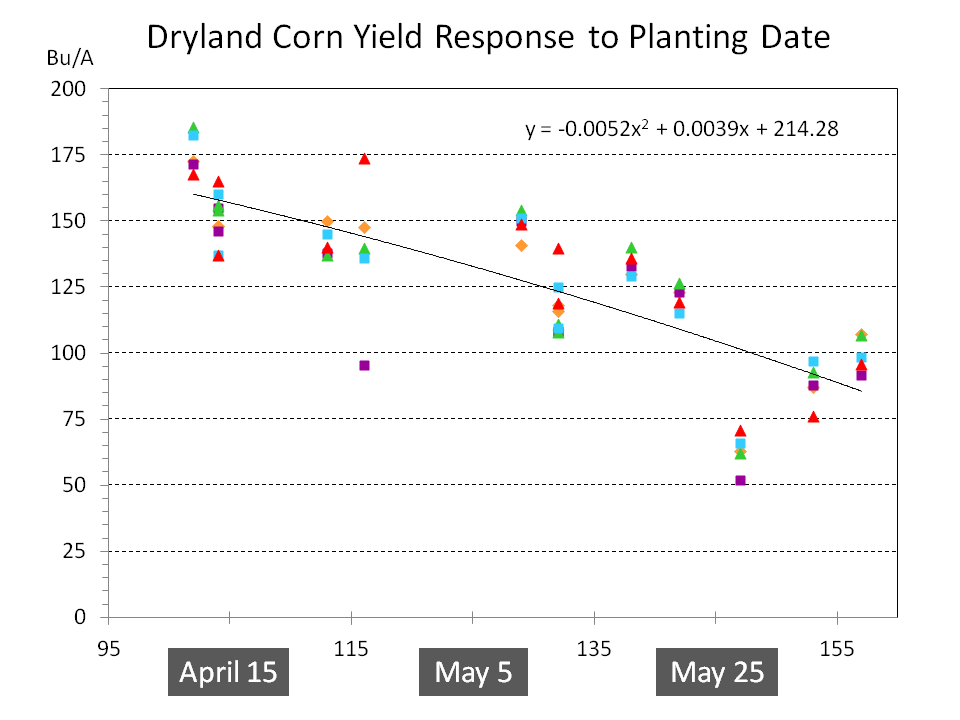