All futures and equities data is a 60 second snapshot of the below exchange delayed rules.

Shutting the Water Off: Irrigation Termination in Your Corn

Irrigation Termination in Your Corn

One of the most critical late-season management inputs in balancing irrigation needs. Thankfully, corn moisture requirement steadily drops from a peak of 1.5 to 1.75 inches per week prior to the dough stage (four weeks post-tassel) to an inch or less per week after dent and even lower as the grain approaches physiological maturity. This reduced crop moisture demand may allow you to scale back irrigation application as the crop approaches maturity. If you use furrow-irrigation systems, you can lengthen intervals between irrigation cycles to reduce expense and prevent unnecessary saturation, which is harmful to the crop. For example, two well-timed irrigation events—shortly after dent and at 50 percent milk- line—should generally provide plenty of moisture for the corn crop during the last 20 days. Pivot irrigation volume may also be trimmed to adjust for reduced corn water use during latest growth stages. The key to proper irrigation timing is simply checking soil moisture using a probe, auger, shovel or other tools, rather than simply doing what you did last week. Weather, soil moisture and crop conditions can vary widely from field to field, week to week, and year to year, so monitor soil moisture level closely and schedule accordingly.

You certainly do not want to terminate irrigation so that the crop stresses before corn physiological maturity (black layer) occurs. If rainfall fails to meet crop demand, water deficit or premature irrigation termination will accelerate maturity, prohibiting kernels from reaching their full potential size and weight. Although kernels outwardly appear mature and corn water use begins declining at the dent stage, this is far too early to terminate irrigation. Potential kernel weight is only about 75 percent complete at the dent stage. Thus, termination of irrigation at the dent stage can reduce grain yields as much as 15 to 20 percent (30-40 bu/a) when hot, dry conditions persist. Early irrigation termination will also likely reduce stalk strength and promote lodging, because plants will cannibalize energy from vegetative organs to fill kernels when they are stressed.

Kernels mature from the outside-in when hard starch begins forming at the crown. The crown will turn hard and become the bright shiny golden yellow color of mature kernels. This starch and weight accumulation will steadily progress towards the base of the kernel (where it attaches to the cob) taking about 20 days to complete. The most reliable method for you to monitor kernel maturity for irrigation scheduling purposes is to observe this progression of the milk-line (or hard starch layer) between dent stage and black-layer. The milk-line is more relevant than the black layer, because it indicates maturation progress, before the black layer is evident. The milk-line is the borderline between the bright, golden yellow color of the hard seed coat outside the starch, compared to the milky, dull yellow color of the soft seed coat adjacent the dough layer. To observe the milk line, break a corn ear in half and observe the cross-section of the top half of the ear (the side of kernels opposite the embryo.) If you have difficulty seeing this color disparity between layers, you can easily find it by simply poking your fingernail into the soft, doughy seed, starting at the kernel base and repeating this procedure progressively toward the tip, until you feel the hard starch. 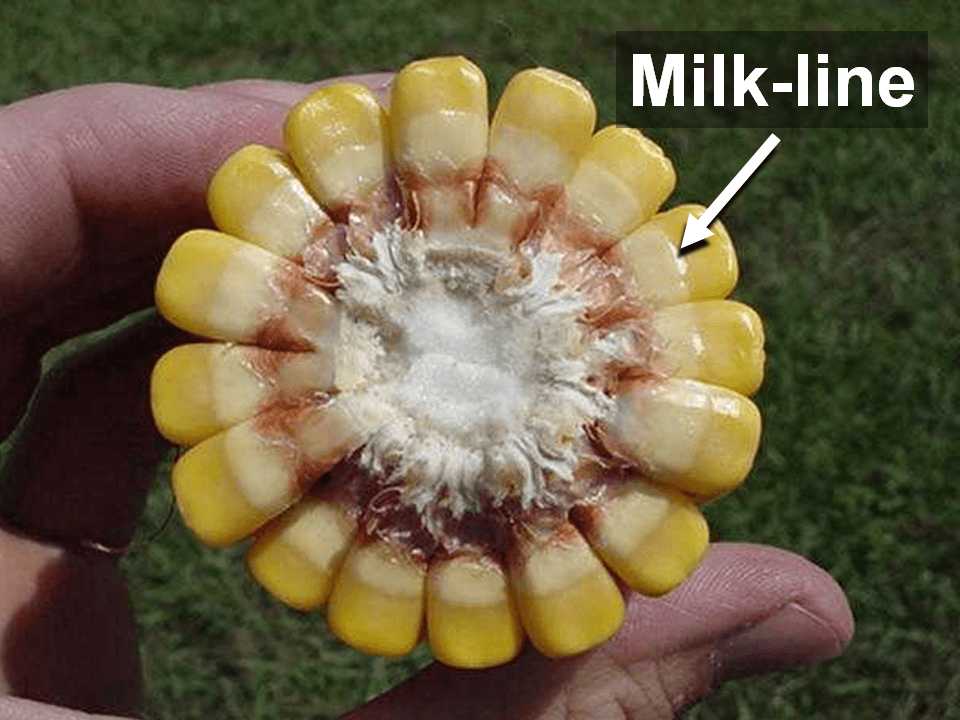 This cross-section of an ear of corn shows the milk-line advanced half-way down the kernels. It is about 10 days from physiological maturity and needs enough moisture to fill kernels during this time.