In Beans: What's Bugging Your Beans? 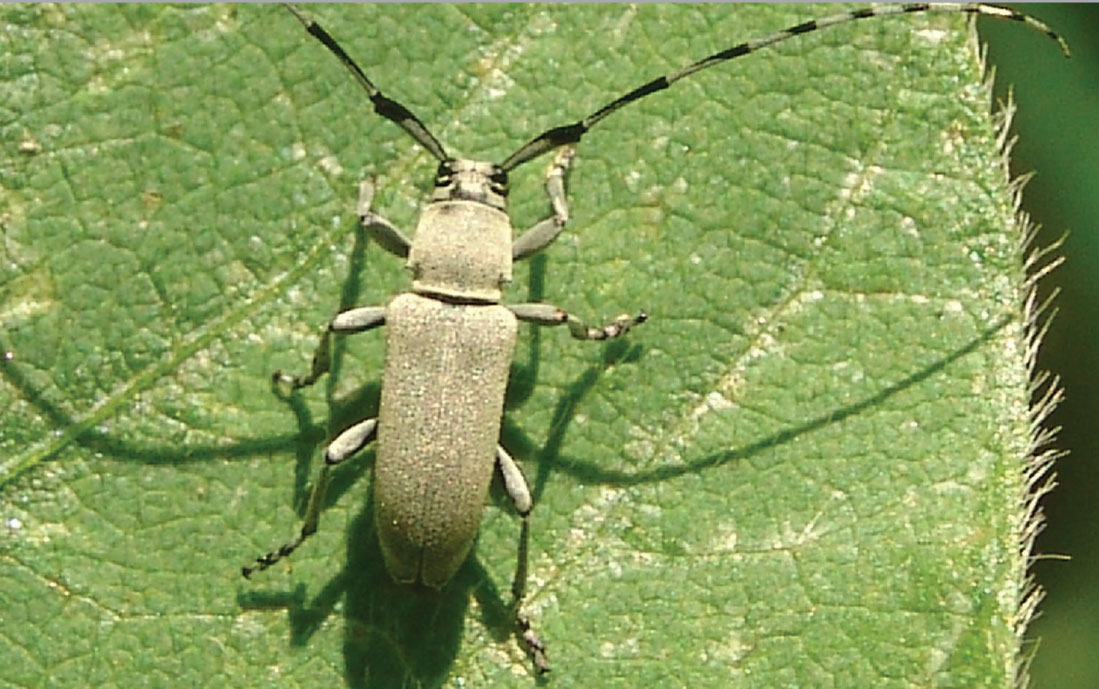 The adult dectes stem borer is an ash gray long horned beetle about 3/8 to 1/2 inch in length with very long antenna, usually as long or longer than the length of the body. Eggs are laid by adult females in the leaf petiole of soybean plants where small pale or yellow color grubs feed and bore the length of the petiole before making their way into the main stem of the plant. Once in the main stem the larva will bore up and down the plant in the pith area of the soybean plant before settling just below the soil line where it will overwinter. Prior to overwintering, the larva will girdle the plant a couple inches above the soil line. It is not uncommon to have multiple larvae per plant but only one will successfully overwinter. There is believed to be only one generation per year. Larvae pupate in the early spring and adults begin to emerge from June through August.

Dectes stem borer damage the soybean plant when the immature stage of the pest girdles stems and petioles. However this type of damage has very little impact on yield because they feed in the pith area of the stem that does not translocate nutrients.The most yield limitingdamage associated with dectes is the secondary effect of lodging from the stem girdling prior to overwintering. It is important to remember that just because a field is heavily infested and there are numerous overwintering larvae, this does not mean the plants will lodge. However, if lodging occurs on widespread scale (as in 2014,) yield loss can be severe. Lodging generally occurs when soybeans are left in the field for extended periods of time after reaching maturity.

Unfortunately there are no viable in-season management options to control this pest. Many tests have been conducted to see if infestation can be reduced by foliar sprays targeted against the adult with little or no success. Even numerous automatic sprays when adults were present have done very little to reduce infestations. Because of where they overwinter in the plant, tillage is effective in killing overwintering larvae. But, since there are so many soybean acres—and other wild host such as giant ragweed and cocklebur—unless this is being done on very wide scale it will likely have little influence on populations. Because the physical tunneling is not extremely yield limiting, I would suggest focusing your efforts on reducing lodging. This can be achieved by timely harvest. You can identify fields well before harvest if they are infested by dectes. Simply look for “withering trifoliates.” If you see a trifoliate and petiole withering and dying it will come off easily when you grab it. It will have dead hole in the base where it is attached to the plant. If you are seeing some of this in the field, randomly split main stems of several plants with a knife and look for tunneling. If tunneling is present on a large portion of the field, try and harvest those fields first if possible. Another suggestion would be to use a desiccant to dry down infested fields faster to allow for more timely harvest. This will not eliminate, but will greatly reduce, the likelihood of lodging in infested fields. Many have asked whether or not certain varieties are more attractive for dectes. Over the years, as long as planting date and maturity group were similar, I have not seen variety differences in infestation levels. However, there can be significant variety differences when it comes to lodging. When you combine weak stem varieties with dectes the result is greater likelihood of lodging.